Applications download firechat for free messaging and communication without internet services or payment.

download firechat for free messaging and communication without internet services or payment.

FireChat as defined by Wikipedia is a proprietary mobile app, which was developed by Open Garden, and the FireChat app makes use of wireless mesh networking to enable smartphones to connect via Bluetooth, Wi-Fi, or Apple’s Multipeer Connectivity Framework without an internet connection by connecting peer-to-peer. 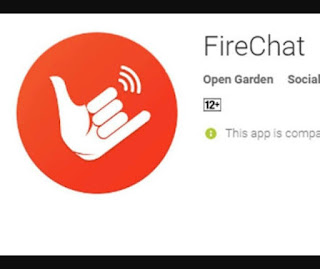 This FireChat app was designed to enable communications tool during civil protests where there is no network provided by the network providers one can use this app to still communicate with one another.

How the FireChat app was created.

The FireChat app was first created and introduced in March 2014 for only iPhones smartphones.

But on April 3 of the same year 2014 the Andriod Smartphone version of the app was developed.

In July of 2015  the private messaging version of the app was introduced but was only made used at that time usually to post messages on public chatrooms.

How to use the FireChat app.

The FireChat app became known and popular in 2014 in the Iranian country when the Iraq governmemt placed a restriction on the internet usage by it's citizens. And afterwards during Hong Kong protests in the year 2015, the FireChat app was promoted in 2015 during Ecuadorian protests.

On September 11, 2015 during pro Independence demostration which was called free Way to the catalan republic FireChat was officially used 131,000 times by the protesters.
During students of University of Hyderabad in india in the in Janaury 2016 following the suicide killing of one of there PHD student named Rohith Vemula.

Some of the students of the school was reported to have used FireChat app because the school shut down it's Wi-Fi.

On September 2017 during Nigeria Army invansion of the leader of the Indeginous People of Biafra ( Nnamdi Kalu) home town Aba the FireChat app was adviced to be used as FG of Nigeria moves to shut down the communication system in the Eastern region of Nigeria. 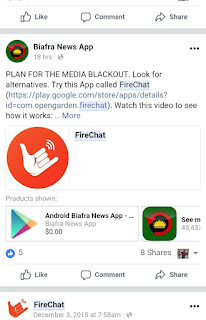 Security measures for using FireChat app.
Edit
In June 2014, FireChat app developers told Wired that people using the app should understand that the app is not a tool to use in communicating anything  that would put the communicator into any harmful situation if the message should be discovered by somebody or individual whose hostile.

Would love to here from you on the effectiveness of the FireChat app enjoy.