We all love to play Run Games like Subway Surfer, Temple run..... but it comes with a lot of challenges and requires you to buy coins, extra life........... and many other ingredients that make the games worth playing with real money.

But with this app Lucky Patcher which is one of my favorite app with which l use to customize visually any app that is compatible with Lucky Patcher app that's already installed on my Phone.

Read also: Best way to tweak or change IMEI of your Andriod Smartphone...

The app can do a lot of things apart from getting unlimited coins..... from apps and games.

You can also use it to remove unwanted Google ad's which is appearing abnormally and very irritating when playing any game on your phone.

And one can use this Lucky Patcher in Andriod or iPhone devices without the help of any Third Party support.

With Lucky Patcher in any Andriod / iPhone application, we can unlock and be able to get unlimited coins, life, tricks...In games like Temple Run, Hill climb racing, Subway Surfers.....  and the Lucky Patcher app are downloaded free from Google Play Store without the need for money.

This app makes it possible for one to do this free in-app purchase from Google Store with or without rooting your Android Phone.

But in this article l will show you how to patch those apps weather your Andriod Phone is rooted or not.

In case you still want to root your Andriod Smartphone with this opportunity then click on this link:

How to root your Andriod Smartphone using KingRoot App.

Lucky Patcher is a very nice app that is developed by Chelpus.

Which is one of the most known app for the rooted device.

It comes with a lot of tweaks and is compatible with almost all apps.

Functions of Lucky Patcher app are

Note: You have to download Busy Box from here to make Lucky Patcher work more compatible on your Andriod Smartphone.

A busy Box is a software that provides several stripped-down Unix tools in a single executable file.

It runs in a variety of POSIX environments such as Linux, Android, and FreeBSD, although many of the tools it provides are designed to work with interfaces provided by the Linux kernel.

It was specifically created for embedded operating systems with very limited resources.

The authors dubbed it "The Swiss Army knife of Embedded Linux" as the single executable replaces basic functions of more than 300 common commands.

It is released as free software under the terms of the GNU General Public License.

I will give two methods one works best for rooted devices but depending on the model of the phone some higher Andriod Phone versions work on Lucky Patcher without root access,
why the other can work on both rooted and unrooted devices.

Background containing all the games and apps which is installed on your phone.

Then look for the games you want to patch (i.e get unlimited coins on) and click on it eg Subway Surfers.

When you click on it there will be a drop-down menu from which you will see things like: 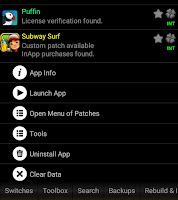 On the top click on Custom Patch but if you don't see this Custom Patch then click your back button once (i.e going back to the first pop-up window).

After downloading go back and click on the game 👉 drop menu 👉 chick open of Patches. 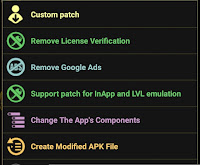 
Launch the game and check your coins and other features and see what happens if there are any changes.