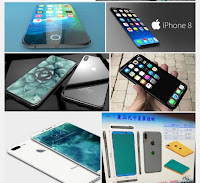 Apple iPhone 8 which run in Apple IOS 11 operating system, has been in rumour of recent but it has not been comfirmed officially by Apple Manufacturing Company during it's Apple developers Conference,

But they gave clues of what people should expect in there forthcoming 10th anniversary model and many questions has been asked will Apple be able to deliver the release of this iPhone 8 by September?

This long awaited iPhone 8 will come with alot of great and amazing features including A Touch ID embedded,

But the big question still asked by many including BUZZ,  is will the Apple Company be able to release wonder Phone on it's stipulated date,

Still this question was not touched by the Apple Company during there recent WWDC meeting.

Some evidence and report which suggests that Apple and it's suppliers has finalized and resolved the issue concerning the iPhone 8 production,

And the number of detailed designs, drawings and already made case protectors for this iPhone 8 appearing online would fuel the conclusion that the iPhone 8 design by Apple has been finalized.

But the possibities of rolling out the IPhone on September is still in doubt.

This are some of the expected specs with which this iPhone 8 will come with from an online source.

Dual-lens camera, possibly in a vertical configuration and/or with AR capabilities

Apple's next-generation processor (the A10X or A11)

Upgraded storage starting at 64GB and 3GB of RAM

When to expect the iPhone?

This question has already been asked again and again but there has not been any official announcement by the Apple Company on when to expect the launching of the iPhone 8,

But during WWDC meeting some clues where giving about the iPhone 8 which suggested that they have been alot of significant Hardware Upgrades planned for this iPhone 8 and many suggested October or November launch, an announcement in September which is followed by severe shortages and delayed delivery.

What to expect from iPhone 8?

Dur just like l have been calling the new Apple device iPhone 8 which has not been officially named the Phone by the Apple Company,

But some of the other names expected to call the new iPhone  just like before releasing the new iPad which was leta called iPad Air 2.

Apple may wish to change the name to either iPhone 10, iPhone X,....... or the offbeat iPhone edition which maybe inspired by the premium Apple watch Edition.

Which IOS is it coming with?

During the WWDC, Apple introduced the next Version of it's mobile operating system IOS 11 which brought out some indirect hints about the next iPhone in proccess.

With this new IOS 11 we will expect the iPhone 8 to come with upgrades that make "Siri",  Apple voice assistant, Smarter and more capable new layout and an option for the Lock screen, App Store and  Control center, with AR software................

Is this the biggest upgrade?

This will be the iPhone Apple biggest upgrade as reported by Nikkei Asian and Wall Street Journal Review.

Also according to BUZZ which suggested that atleast one new iPhone model will come with OLED display and Slashleaks suggested   that the display would be made up of Ion-X glass , like the Apple watch and that this new screen will cover visually all the entire front of the iPhone device.

From the image leaked by a Chinese site Weibo through (Slashleaks) and Sonny Dickson leaking it on Twitter which is suggested that the iPhone 8 will come with a Scanner on the back and a Ditch Home button altogether just like in Samsung Galaxy S8. 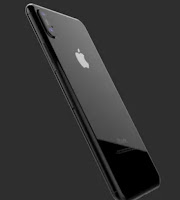 The iPhone 8 according to Mac Rumours by the Economic Daily News the Apple supplier Taiwan Semi conductor Manufacturing Company says that the Apple Company has finalized a solution  but still that Apple has other option which is to locate Touch ID to the back of the iPhone or eliminate it entirely or to delay the launching of the iPhone 8 altogether.

The iPhone 8 will come with a Face ID for "Biometric" Identification which will be made possible by the 3D facial recognition technology provided by LG from the report from Korea Economic Daily.

This Face ID could be combined by Apple on it's new Camera lens array which will replace the Finger Print Sensor as the primary interface of the authentication of the user.

The iPhone 8 Audio features according to JP Morgan as reported by Mac Rumours the iPhone 8 will come with "Enhanced Reciever" which will be located at the Slit of the iPhone where you place your ear when answering phone calls,

The iPhone 8 will come along with Air Pods according to JP Morgan, which is Bluetooth enabled headphone which is currently at the price of ($159 accessory in UK and AU, $229 in Australia).

The price of this iPhone 8 by some companies like Morgan Stanley, Fast Company and most recently Goldman Sachs suggested that this iPhone 8 could cost about or more than $1,000 in the US which is approximately £800 or AU $1350.
With the one containing 64GB costing from the range of $850 just like the new Samsung Galaxy S8 plus.

The iPhone 8 will come with Gigabit LTE which will make it trail more than it's contapart Galaxy S8 in it's Celluellar Network speed.

But the Apple device uses Qualcomm and Intel modems according to CNET's Rogor Cheng which at the moment Intel Version can't deliver Gigabit LTE speed which may force Apple to slow down the Qualcomm Version to ensure all iPhone models has the same Footing.

From the rumoured report which suggested the iPhone 8 will go with a USB-C Port with it's usually Lighting connector which includes a 3.5 mm headphone Jack Adapter.

This amazing iPhone 8 as suggested by some inside sources like Verge,  Nikkei Assian Review,  Mac Rumours says this iPhone 8 will be able to come with a wireless charging feature which will be made possible in the premium iPhone 8.

According to the Apple analyst Ming-Chi Kou he suggested that all new iPhone models which comes with the "S" Series, probably will have a wireless charger.

The new iPhone 8 will come along with the Lighting Port instead of USB-C Connection which will make the device to be more Resistant to water.

The Korea Herald suggests that the iPhone 8 will come with a higher water resistance rating of IP68 compared to the current generation of IP67,

Which means the iPhone 8 can stay longer in water without been affected or penetrated.

The new iPhone 8  from the image which has been published, suggests that it will come with two Camera in vertical configuration which appears to show LCD flash at the middle which will support augmented reality if it comes with those LD 3G Sensors.

The new iPhone 8 may come with a new Storage System of about 64GB and 256GB model making them to dump it's former 32GB model according to Trend Force.

So lets all be expecting this wonder Apple iPhone 8 device.